watch 03:41
Wiki Targeted (Games)
Do you like this video?
Play Sound

The Delorean (known in real-life as the DeLorean DMC-12) is a vehicle in Jailbreak which came out in the Winter 2020 Update. It is found in the Power Plant parking lot, replacing the Challenger's spawn point. The car costs

175,000. It can glide over water, making it the first vehicle in Jailbreak that can do so that is a land vehicle. However, if you dive into the water at a certain angle, then you can manage to go underwater.

It was a highly requested vehicle by the community before its reveal, with one user, known as HAPPYHONGO, going as far as to make a Twitter account to get the developers to add it into the game. Eventually, it was added alongside the Cash Truck and Season 1: New Beginnings.

The Delorean has opening doors, and, like many other sports cars and supercars, 2 seats. It also has a detailed interior to keep in line with the movement to give all Jailbreak vehicles an interior. It makes a good last-resort getaway from the Power Plant, due to its close spawn, all-around good stats, and its ability to hover over water if needed.

In terms of overall performance, the Delorean is fairly good all-around. It features good launch speed, comparable to the Model 3. Its top speed beats out most sports cars and general cars, but it is no match for hypercars. Although it is not as quick as most supercars, the Delorean has the ability to drive over water, unlike any other vehicle in the game; if the player gets out of the vehicle while it is on water, it will sink to the bottom. It has great off-roading, being able to climb some obstacles with relative ease, beating out lots of mid-tier vehicles and comparable to the Torpedo and M12 Molten, and can handle very well.

Overall, the Delorean is an all-around great performer, but is less price-efficient than some vehicles such as the Model 3. The hovering ability makes the car a little more worth the price, allowing players to make shortcuts that other land vehicles are unable to make. However, given the current map layout of Jailbreak, the Delorean's ability to hover over water does not give it much of an advantage as most bodies of water have sandy parts on the edges, which allows most vehicles in water to climb onto land, and the map does not have many opportunities to use shortcuts through water. It is a good getaway vehicle and backup vehicle because of its ability to glide, however. 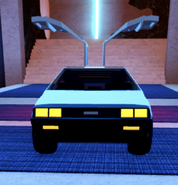 The front of the Delorean.

The left side of the Delorean.

The top of the Delorean.

The right side of the Delorean. The rear of the Delorean.

Another view of the Delorean's rear.

The "HONGO" license plate on the back of the car, which references "HAPPYHONGO", the Twitter user who suggested the Delorean.

The DeLorean with a siren equipped

The Delorean at night.

The Delorean hovering over water.

A general view of the rear of the Delorean.

Another view of the rear of the Delorean.

The Delorean with its doors open.
Add a photo to this gallery

The GUI for buying the Delorean.
Add a photo to this gallery 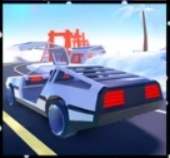 The Delorean in the thumbnail of the Winter Update.
Add a photo to this gallery

Languages
Retrieved from "https://jailbreak.fandom.com/wiki/Delorean?oldid=255565"
Community content is available under CC-BY-SA unless otherwise noted.