The Firetruck is a vehicle in Jailbreak added in the Fire Update. It costs $175,000 and has 2 unique features: an interactive ladder and a water cannon that can extinguish fires and push back nearby players. It spawns at the Fire Station.

The Firetruck is deemed useful when fending off police officers or a large group of criminals. The Firetruck's water cannon (enabled by pressing G or the hotbar button) can stun the attacker(s) and nearby teammates. However, even though the players caught in the water beam cannot escape, they can still use guns to attack you, and will eventually be pushed out of range & can escape. This vehicle is incredibly slow and can be outclassed even by the Monster Truck in terms of speed.

The Firetruck's water cannon can be used to quickly extinguish fires made by players, lightning, and/or rockets. Simply press G it in front of a fire and it will be quenched. This allows you to destroy roadblocks made by trolls or the opposing team. However, while using the vehicle, the water cannon can't be rotated. Putting out a fire regularly grants $100 and $120 for VIP Gamepass owners.

The Firetruck's ladder is also a useful mechanic; It can be used to reach the top of some low leveled buildings which allow you to gain a height advantage. It can also do it with both Police Station 1 and Police Station 2 if you need a helicopter and don't have a keycard. You can use it to 'snipe' unsuspecting enemies below.The ladder can still be toggled by people who don't own the Firetruck.

Though the Firetruck can be a great vehicle for Cargo Train and Passenger Train robbery heists, for versatility, by putting out fires and having a defensive capabilities against enemy groups, & being great at off-roading; it is known as the worst vehicle in terms of acceleration, due to the fact that the Monster Truck and Camaro outclasses its acceleration. Worse acceleration means that the vehicle will slow down when climbing up hills or on sloped surfaces, but cannot climb at steeper hills off-road.

It is also criticized for poor seating capacity in such a large vehicle that can make use for more than 2 seats.

The front of the Fire Truck.

The right side of the Fire Truck.

The left side of the Fire Truck. 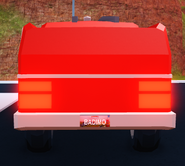 The back of the Fire Truck.

The top of the Fire Truck. 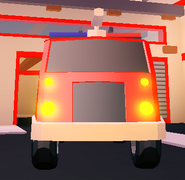 The Fire Truck with sirens. 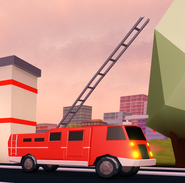 The Firetruck with the ladder up.
Add a photo to this gallery

Languages
Retrieved from "https://jailbreak.fandom.com/wiki/Firetruck?oldid=146255"
Community content is available under CC-BY-SA unless otherwise noted.