Allows the player to fly

The Jetpack is a transportation item added to Jailbreak in the Jetpack Update. It runs on limited fuel that players can refill for free when on the ground. There is an additional option of using Rocket Fuel to fly for 25 Robux. The colors of the flames that are emitted by the jetpack will be purple when using the rocket fuel improving the speed, height, and length of the jetpack's flight duration.

When using the jetpack, players can fly high into the air by pressing once and holding the jump button. This makes it useful for escaping confrontations. If there is fuel left, the jetpack will allow its wearers to descend slowly, preventing fall damage. This uses less fuel than ascension does. It is recommended to tap-fly (e.g tap the spacebar or jump button) rather than simply holding down the jump button.

The jetpack is activated by jumping twice and holding the spacebar.

On poor connections, the Jetpack may cause the player to violently ragdoll on landing, which can cause problems if one is using it if they are experiencing internet connection problems.

On Passenger Train and Museum heists, once the user flies with a loot bag, the bag disappears, allowing the player to use weapons again. However, going to the Collector will still give money. The bag does not cease to exist, rather it collides with the feature that a moving Jetpack forces the player to unequip anything from their hands. 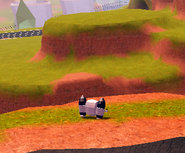 An image of the jetpack at its Canyon Lookout location

The jetpack located at its second location, the Airport Traffic Control Tower.
Add a photo to this gallery

Languages
Retrieved from "https://jailbreak.fandom.com/wiki/Jetpack?oldid=146195"
Community content is available under CC-BY-SA unless otherwise noted.