Not to be confused with the Tesla Roadster or Tesla Cybertruck.

Due to it's fast top speed with level 5 engine, it can actually give a quite hard time for a stock Lamborghini to catch up with this.

Among the slowest in the game.

Very good handling even at it's highest top speeds.

Has worse off-roading than that of the Lamborghini.

The Tesla Model 3 is a vehicle in Jailbreak that costs $16,000 in-game cash. It is based on the Tesla Model 3. Its stats are great for its price and its location(s) can come in handy, being found at the two parking lots with Badimo car chargers. The first spawn point is located near the entrance of the tunnel near the Jewelry Store, and the second is near the Bank. It is one of the quietest vehicles in the game due to its silent motor, and carries a nice amount of passengers, making it a contender for team getaways.

At first glance the Model 3 is a subpar vehicle, having slow speed and acceleration with its stock engine. However, with the level 5 engine, the Model 3 boasts a much improved dexterity, beating the Mclaren in acceleration while being slightly faster than the Black Hawk  in top speed, all while costing only $16,000. Along with its amazing handling, this makes it nearly unmatched for impromptu getaways and early game grinding.

The Model 3 has one of the best accelerations in the game. It's acceleration is only slightly slower than some supercars that cost exponentially more. The top speed is, (as mentioned above) more than impressive for its price tag, being comparable to many low-mid tier supercars such as the Mclaren and Ferrari when it comes to mid-term distances. The only downside of its speed is its reverse, being as slow as the Roadster and Volt Bike.

The handling is excellent, remaining manageable and smooth at even its highest speeds. Its downsides do begin to show in its off-roading however, where it proves lacking due to its low suspension and lower center of gravity. But it should be noted that these perks do give it decent ramping ability. 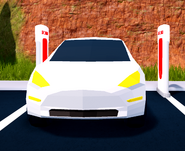 The front of the Model 3.

The left side of the Model3. 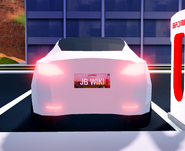 The rear of the Model 3.

The right side of the Model 3.

The top of the Model3.

The classic spoiler equipped on the Model 3.

The Model3 equipped with police sirens.
Add a photo to this gallery

Languages
Retrieved from "https://jailbreak.fandom.com/wiki/Model_3?oldid=146668"
Community content is available under CC-BY-SA unless otherwise noted.