The Museum is one of the several locations to start a robbery/heist in Jailbreak. It was added in the Museum Heist Update (06/26/2018) and is located right next to the Radio Tower. When robbing the Museum, without the Bigger Duffel Bag Gamepass, you are able to have 5 kg of maximum carrying weight. If you do have the Gamepass, however, you'll get an extra 3 kg of holding weight, or 8 kg altogether. Holding weight can be filled to max capacity in several ways, as the Museum holds a lot of loot. The Porsche and the Classic Car spawn at this location (Porsche on the parking lot, and classic car on the pedestal), allowing a rather easy getaway if you own either of those cars. The Museum comes standardized with a "getaway driver/assist fee," which awards the driver of a vehicle 10% of the value of any passenger's loot when the passenger cashes in. The passenger does not get a reduced amount of money. Beware, however; even though Police cannot enter this location, they are still able to camp outside the doors of the museum, on the museum roof, and even at the Volcano Criminal Base (but it is possible to glitch in using the Rope into Museum Glitch). They are also, as of recent updates, now able to throw grenades and/or launch rockets into the Museum.

The Museum has turned out to be a popular robbery for criminals because of the high bounty you can get, one for robbing the museum and (optional) an assist. Some people have criticized the museum for ragdolling onto the floor, even though there are wooden beams to support it. Due to that fact, the museum is halfway between the easiest robbery and the hardest robbery. It is recommended that you gain a bit of experience playing Jailbreak so you won't die while robbing the museum.

You will have 4 minutes of robbable time (once the robbery has started). Once the time expires, the hole in the roof disappears, and any criminals that are still in the Museum will be teleported to the front of the Museum without their robbery money. It takes around 230 seconds or 3 minutes and 50 seconds (about 2 in-game hours) before you can place the dynamite again. Otherwise, a notification will appear saying that the Museum robbery opens in [number of seconds until the Museum opens].

NOTE: (Once you rob one item, you will receive a duffel bag on your shoulder that prevents you from using items and performing commands, like punching and crouching).

You are able to rob the Museum by climbing the ladder on either side and/or parachuting down onto the roof and placing dynamite on the detonation wires in the roof. This procedure requires two players and can be a bit lengthy. Criminals sometimes also ragdoll when they fall through the hole and can easily trigger the alarms and security. Due to this happening, the developers have added support beams to the roof to help reduce the chance of this happening.

From the roof, all Criminals involved in the robbery will fall into the Museum, landing on the left-hand balcony/staircase. At this point, most participants will split up into different areas; those areas being the following:

In this area, the T-Rex skeleton is robbable. Players can also shoot down planets (each planet weighs 1 kg, the Moon is also 1 kg, and the Sun is 2 kg) hanging from the ceiling. They must be careful because there are moving spotlights covering the floor, which can damage them. There are currently 11 robbable dinosaur bones, and each piece weighs 1 kg. If players are low on health, they can stand on the dinosaur platform which has a grey color, because lasers don't go through it. On rare occasions the bones can glitch and push the player through the floor and off the map, killing them.

In this room, there's a rather large Jewel, along with a simple laser puzzle. To complete the laser puzzle, you simply have to click the lasers until all five of them align. When they do, a black brick wall will slide open revealing yet another small security office. If both levers are pulled down at the same time, the security system will be disarmed, the lights will move slower, and the doors will be unlocked. The lights will still hurt you, however. If the Gem is stolen, the police will be alerted.

In this room, there is a classic "Pipe Puzzle," along with an Egyptian Pharaoh mask (2 kg). Once you solve this puzzle by clicking the pipes & rotating them to get them from corner to corner, you'll be revealed a small security office with a mummy's corpse (5 kg) inside of a glass container, along with an exit. Also in this room, however, is a lever, which is partly used to disable the alarm/security system. Like the diamond, if the Egyptian Pharaoh Mask is stolen, the police will be alerted.

In the showcase room, you're shown several of Jailbreak's past (and present) artifacts. In the showcase room, you are able to shoot out the middle right glass panel with either a Pistol, Shotgun, Rifle, AK47, or Uzi and break into the showcase to rob the artifacts in there. Rocket Launchers and Grenades cannot blow up the glass panel. In the showcase room, you'll find mock-fidget spinner rims taking up 2 kg of your bag, a clear nod to their rarity & importance in Jailbreak's history. Also in there, you can find gold bars (3 kg), a cone (1 kg), and a giant donut (4 kg). Nothing else is in there, and due to the time limit in the museum, people will likely go to different areas that do not require you to use any items in your inventory.

In the Art Gallery, you'll find several unique pieces of art. All of the art pictures in this gallery do have a twist, however; they're a spin-off of real paintings, only with ROBLOX characters blended into them. Each painting in the art gallery will take up 4 kg of your holding space, so for no upgraded duffel bag players, paintings will take up a whopping 80% of your holding space. For those who do have the upgraded bag, however, a single painting will take 50% of your holding space, meaning you are able to grab two paintings and leave the Museum, or at best, start disarming the alarm system. Note that in order to avoid the two lasers that are present in the Art Gallery, you must stand in between them.

To escape, it requires 2 people in two separate rooms. One player must pull the lever in Switch Room #1 while the other must pull the lever in Switch Room #2. These two switches must be pulled at the same time, or within 3 seconds of each other, in order to disable the security. When security is disabled, all 12 cameras will turn white and slow down. Cameras still do damage, just not as much as when the security isn't disabled. Next, escape through the side or main doors. They can also escape from the roof that the player came from if someone drops a rope for them, but they have to be willing & trusted to do it. Be careful, as most of the time, police tend to wait or camp criminals outside the Museum. However, they cannot enter without using the rope method or driving a vehicle inside. It is useful that players can also grab on to a helicopter rope to escape, as police rarely camp at the roof.

There are a few reasons why alarms may be triggered. These are:

Tips and Tricks for Robbing the Museum

If you rob the museum to the max amount of kilograms, you should earn up to:

Assists are 10% of what the player you just assisted robbed. Nobody loses any cash but you get extra. Assuming you and the person you assisted had robbed the museum to the max amount of kilograms, here are how much it will give.

The left side of the Museum.

The right side of the Museum.

An aerial view of the Museum.

The back side/rear of the Museum.

The Museum's base floor/T-Rex skeleton.

One angle of the art gallery.

Another angle of the art gallery. 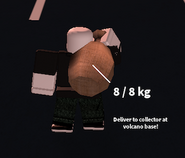 One angle of a criminal carrying a full upgraded bag. 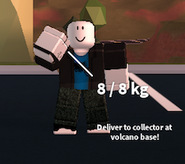 Another angle of a criminal carrying a full upgraded bag.

One angle of Base Floor Room #1's security office.

Another angle of Base Floor Room #1's security office.

One angle of Base Floor Room #2's security office.

Another angle of Base Floor Room #2's security office.

The explosives used to get inside the Museum.

The Museum and the gate control building at an angle.

A photo of the former Radio Station that once occupied the current site of the Museum.

An example of a lever that must be pulled in order to escape.
Add a photo to this gallery

"The Robbery (a) by ROBLOX"

There are many difficulties and flaws that many players criticize with the Museum.

The Requirement of Two Players to Blow Up The Dynamite

The Museum is the only heist that needs 2 players and it is not possible to start and end the robbery without the second player because sometimes, during a robbery the second player will die, and you will be stuck in there until getting kicked, kill yourself, or if other players enter the Museum and disable the security, or you can just spawn a vehicle beneath the way you came from and exit that way, if you have the Mobile Garage Gamepass however players can no longer spawn vehicles inside of buildings after the Garage V2 update, but players can still spawn a vehicle under the hole left by the dynamite.

Police tend to camp the Museum Collectors, if some criminals manage to get away with a Museum robbery making it very hard for a criminal with a heist bag to collect their money. Criminals can tell if police are camping the collectors if they see blue dots inside the Volcano Criminal Base on the mini-map. Criminals have to wait for the police to leave before criminals can turn in their money. To avoid police, go in from the Evil Lair's river entrance, and go through the vending machine and chair entrance, then quickly sprint to the female Collector to receive your money. However, this will not work if the player is below level 10 (Level 5 in Season 2)

Languages
Retrieved from "https://jailbreak.fandom.com/wiki/Museum?oldid=145568"
Community content is available under CC-BY-SA unless otherwise noted.