Next to the Town, near the Gas Station 1, and Train Station 2

The Prison, otherwise known as the Jail, is a major location in Jailbreak where prisoners spawn and have to escape from.

Half of this compound itself is surrounded by a barbed-wire fence, players on any team when jumping onto these will get hurt. The rest of it is surrounded by a large brick wall. The sewers - the latest escape route from 2018, is located between the Visitors Building and Police Station 1, which extends into an underground corridor. The back half of the prison has a standard wall with climbable towers (some towers containing buttons that can be used to operate the lights), however, players need a keycard, a Helicopter, a UFO or a BlackHawk to get into these towers. There are several trees scattered in and around the complex. There is an American flag in the middle of the yard, too.

When a Bank or Jewelry Store robbery starts, the Prison bell will sound until the criminal/criminals exit the building or die. It is located at the north-west corner of the map.

The Prison, opposite the Yard.

Not required, except for certain rooms

The Main Building is the largest building of the Prison, with two floors, several rooms, and plenty of floor space.

When players enter the building from the outside, the door in front of criminals will be the Cafeteria. to the right, the Top Criminals Board, which serves to display the criminals with the highest bounties, can be found. To the left of the entrance is the telephone area, which contains several aesthetic telephones and chairs. The left of the Top Criminals Board has three cells a flight of stairs to the basement that houses the other prisoner cells and a small armory for the police (or a prisoner if they so happen to obtain a keycard). There are six doors in the main building counting the 1 inside the Cafeteria.

In front of The Prison

The front of the prison complex contains a very large parking lot. Three vehicles spawn at the parking lot: the SWAT Van, that comes with the SWAT Gamepass, a Camaro, the Patrol, and the SUV.

The Prison, in the Main Building.

The Cafeteria is a location in the Prison. This location does not have much of a purpose other than to be a spawn location for prisoners, but it does serve a bit of "sentimental" value. In the Cafeteria, there are tables and a countertop where prisoners would supposedly grab their meal trays from. This is where prisoners will always spawn at Breakfast or Dinner time on the Prison Schedule.

On the tables, there are meal trays. Each of these contains a randomly colored juice box and some other food like bacon and slices of meat. Originally, there was only one of these in the near right corner table. Though it was not an Easter Egg, it is well known as most players usually notice it as they spawn in the Cafeteria.

There was a kitchen in the back of the Cafeteria. Though access required a keycard or the use of a police officer, it was used as an escape to the roof which then leads to a rather large jump over to the perimeter walls of the Prison. This was the arguably least used escape method. See Escaping for more details on how to escape using the kitchen.

The Main Building, via the corridor.

Originally, this contained 6 boxes and another door that leads behind the Main Building.

However, this now contains 11 boxes that have the Jailbreak logo and an arrow to mimic the Amazon logo. One of them is blank. There is also a large door in the back, which leads to another door on the prison wall. Both require keycards to open, along with the door to enter the room.

The meal tray as of the 1B Visits Update. (REMOVED)

The storage room, right beside the Cafeteria. (REMOVED)
Add a photo to this gallery

Prisoners could have entered the kitchen and climbed into an air vent, accessible by using the cupboards to boost a player into it which would lead them to the top of the Main Building. To escape, all a criminal needed to do was cross over a small wire to jump onto the wall. This method of escape was easily the most uncommon one to see being used and was usually only used when cops were difficult to sneak past.

In the corridor, straight ahead, past the Cafeteria and the Yard.

The Telephone Room is located in the main building left of the entrance. It does not require a keycard.

Inside are supposedly telephones and books. Criminals can't use the telephones or books because they are merely just for decoration. Prisoners spawn here sometimes, and they can sit in the chairs.

There used to be a glitch where the doors of the room will be locked when a server is started and will require a keycard. This was fixed in the Wings/Spoiler Customization Update.

Most locations inside the Prison requires a Keycard for a prisoner to enter or a police officer can let them in. The exceptions are a criminal's Cell, the Cafeteria, the Yard, the Telephone Room.

Police Station (1) is a large location at the Prison. Inside of Police Station 1, there are many Weapons and Items for police officers (or prisoners/criminals with keycards) to obtain. A few glowing monitors on desks with some chairs can be found. The upper floor has a darker blue floor but otherwise the same desks and computers. On the roof of the police station, there is a button that opens the gates between the police station and there is also a helipad where the Helicopter spawns. There is an American flag directly in front of the police station.

Cell floor below the Prison Building.

The Security Office is a rather small location found at the prison. It is located on the cell floor, which is the lowest one in the map, along with the bank's basement & the sewers.

If a player spawns as a prisoner, follow the opposite way the arrows are pointing in the cell floor, and the prisoner will eventually reach this location. Players will need a keycard to get in, or a police officer must let them in.

The armory here includes a shotgun, a pistol, but lacks SWAT gear and Police uniforms. Police only spawn here at "Cell Time," between 11 PM & 6:30 AM.

The weapons table, with the pistol & shotgun on it.

One angle of the interior of the Security Office.

Another angle of the interior.
Add a photo to this gallery

The Visitors Building is a minor building in Jailbreak. It is located inside the prison. Prisoners may use this route to escape, and due to its lack of importance, and because it's rarely guarded by the police. When entered, a Prisoner will be considered guilty.

The inside of the building has a modern red design applied to the interior walls and floor and is furnished with a reception counter, five trash cans, and three vending machines. It also has six, long black electrical lights that hang from the ceiling. In the front of the visitor's building, there's an indent, but otherwise normal walls.

The interior of the Visitor Center at an angle.

The interior of the Visitor Center at another angle.

The Visitor Center as viewed inside the Prison.
Add a photo to this gallery

The Yard is a location in Jailbreak that is located in the prison. It contains a large variety of objects, although most of them are just props, the trampoline and treadmill are both somewhat intractable. The trampoline, when walked on, will bounce prisoners into the air. If they try to stay on for an extended period, it will bounce them higher than usual and ragdoll them when hitting the ground. The treadmills will push the player back on them, similar to the water in the sewers. During free time and cell time, the yard may become crowded because Prisoners will spawn there when they join the game.

It is speculated that in the future, prisoners may be able to work out in the yard, and also gain extra health that can be used when fighting off/taking shots from Police, as the idea has been on their Trello for quite some time now.

The Classic Yard.
Add a photo to this gallery

The Sewers is an underground location that prisoners can use to escape from the prison.

It has four entrances and exits. Two of them are outside the prison and two are inside the prison. The water in the sewer slowly moves players, pushing them along with the current. Running with the water movement makes players run/walk faster while running against the water movement makes players run/walk slower. The entrance is located between the Visitors Building and Police Station 1.

Once a player is in the sewers, the only way they can escape is through the way they came in at, or at one of the other 3 escape points. The exits outside the prison don't open from the outside, only from the inside, yet players are still able to enter through them if they have a friend inside the sewers already.

The Sewer entrance from Prison.

The Sewer entrance in the Parking Lot. 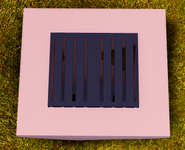 The Sewer entrance outside the prison, close to a wall. 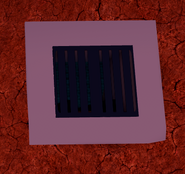 The Sewer entrance outside the prison, close to the Camaro spawn.

The "Teenage Mutant Ninja Turtles" easter egg in the Sewers.
Add a photo to this gallery

Jailbreak's prison operates on a daily schedule. While guards may choose to enforce or ignore this daily routine, the game itself does not force the Prisoners to enter their cells, attend breakfast, work out in the yard, etc.

It is rare to see prisoners who follow this schedule, as they usually focus on escaping the prison.

Each 15-minute time period is 10 real-world seconds long, meaning an hour is 40 seconds long, and a full day-night cycle is 24 minutes (plus two 4 minutes of rain cycle).

A view of one of the Cafeteria entrances and Main Building corridor.

One the gates leading to the yard.

A view of the cell area on the bottom level of the Main Building.

A view of the "Most Wanted" board.

A view of one of the Cafeteria entrances and the three surface level cells.

The Police Station with the regular Helicopter on top.

The interior of the Cafeteria.

The interior of the Delivery/Storage room.

The driveway players use to escape from the Delivery/Storage room.

The exit of the Delivery/Storage room.
Add a photo to this gallery

Police Station 1, along with a Helicopter on top.

The exterior of the Kitchen.

The corridor in the Main Building

The Gates leading to the yard, closed in a new server.

The Kitchen
Add a photo to this gallery

The cells are locations in Jailbreak. They are found in the Prison inside the main building and the Military Base's Most Wanted Building. If players enter the main building from the courtyard and follow the hallway to the end, they can take a flight of steps down. At the bottom is the cell block. Arrested criminals will spawn here after they switch to Prisoner for 20 seconds. They may also notice arrows on the ground, which point towards the flight of steps. These arrows are used for directing new players to where they should go after getting out of their cell. If players follow the arrows in the opposite direction, they'll encounter the Security Office, which holds a few guns, along with a small desk.

The cells in the Prison.

The cells in the Military Base.
Add a photo to this gallery

The basement of the prison, with several cells and the Security Office in it.

The exterior of a cell.
Add a photo to this gallery

Languages
Retrieved from "https://jailbreak.fandom.com/wiki/Prison?oldid=143913"
Community content is available under CC-BY-SA unless otherwise noted.