Start a Wiki
watch 01:53
The Loop (Games)
Do you like this video?
Unobtainable Content
The content featured on this page is no longer obtainable in Jailbreak. It is now exclusive content that can only be used by owners, and is restricted for new players.
Became unobtainable on: November 3rd, 2019 (Season 4 Update)

Fair Beaten by the cybertruck, which is 75k cheaper

GreatOne of the fastest accelerations in the game

Excellent One of the best off-roading vehicles

The Raptor is a now unobtainable special and off-road vehicle that was added to Jailbreak on 6/23/2019. It is one of the vehicles that was added as a reward for Season 3, along with its Criminal counterpart, the R8.

The Raptor is a vehicle meant specifically for Police, as stated by Badimo, much like the Arachnid from Season 1 and 2.

Unlike most vehicles, the Raptor had specific requirements that players had to meet in order to obtain it. Over the course of Event Season Updates, this vehicle's requirements and obtainability have changed.

In Season 4, the Raptor was made unobtainable. If a player attempts to purchase it, they will receive a notification that states: "Vehicle is from another season."

The left side of the Raptor.

The right side of the Raptor.

The front view of the Raptor.

The rear view of the Raptor. 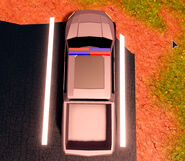 The top view of the Raptor.
Add a photo to this gallery

Languages
Retrieved from "https://jailbreak.fandom.com/wiki/Raptor?oldid=146456"
Community content is available under CC-BY-SA unless otherwise noted.